So guilty shameful secret time: I love kitsch.  I love tacky things, gaudy things, mid-century aesthetic.  I seldom actually look for such stuff in SL, and out of the blue, someone told me that Collabor88 was doing ‘kitsch’ as their theme this month. Here is me with my three purchases from Collabor88 then! And a couple other of my kitsch objects.

The Easter Island head may have been a clue that I wanted to go to this Collabor88, mightn’t it?

The two lamps are from Schadenfreude, and the chair (which is the other purchase) is from Trompe Loeil.  The candle is a gacha prize from Nylon Outfitters, the “(NO) Doll Head Vase – Sugar”, while the side table’s a gacha from Scarlet Apple, the “{sa} Scarlet Apple My Chevron Console Rich Wood”

Here’s the first of the two lamps: Because doesn’t everybody need a green hula girl?  She’s the “Schadenfreude Alien Hula Lamp”, from Schadenfreude.
There are a few things you can’t see in this picture: the lamp comes with a re-texture HUD, which enables you to choose one of several different textures for the lampshade and for the fringe at the bottom.
Also, the grass skirt sways side to side slightly, as if she were hula’ing.

The other lamp is their “Green Mermaid Lamp”: same color-change hud for the lampshade here.

The other thing I bought was this lovely chair, which was, actually, the main reason I came to the Collabor88 event: I have a weakness for Trompe Loeil’s stuff, too (indeed, the big round paper lantern is one of theirs!) 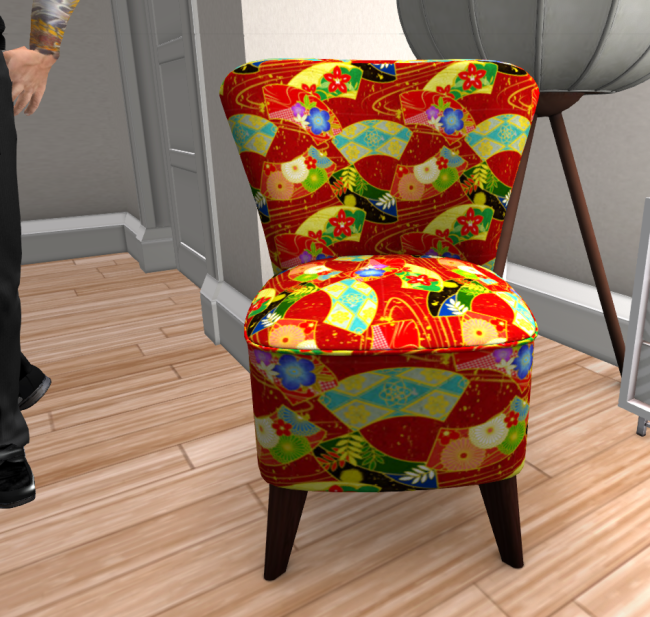 There are several patterns for these chairs, this is the “Thrift Shop Accent Chair Tanno Pattern”.  Again with the half-baked ‘Japanese’ thing going on in my house, I know.

Each of these three items is a mere L$88 from the Collabor88 shopping center, which is reachable by clicking below. Happy shopping, kitschmavens!