You know? I’d rather see this on TV. 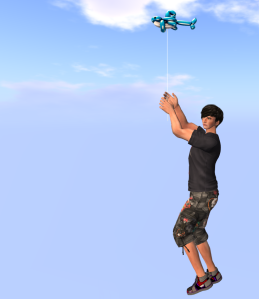 And Sharkey says: All night long I think of those little planes up there. Flying around. You can’t even see them, they’re specks! And they’re full of tiny people. Going places.
And Sharkey says: You know? I bet they could all land on the head of a pin!

So I was browsing around on plurk looking for something I hadn’t seen before, and there it was.  *BOOM*’s designer has decided that for Shark Week, she will have a shark balloon animal out, suitable to walking around holding (as in the first picture) or for hanging onto for dear life while you fly (I took some liberties here: the object doesn’t over-ride your flying animation.  But I had to make it look that way).
Do you need a shark balloon animal?  How about some nice clothes? Well then, you should visit *BOOM* and pick some up!

One thought on “Soo Sharkey.”