who went deeply into the surreal… And the one sim 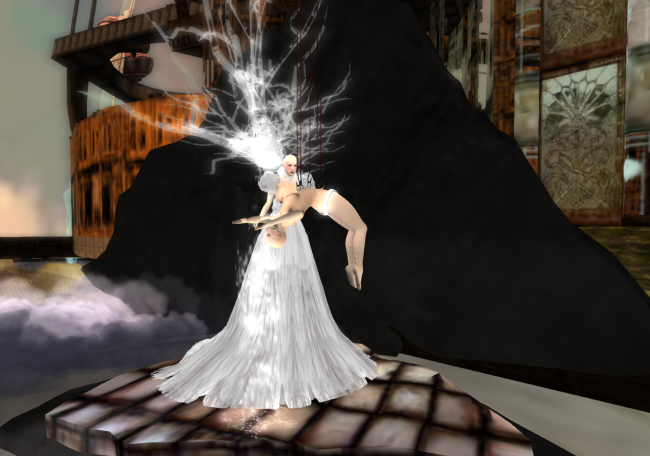 that had to hold them all together.

(text inspired by the fact that I just spent almost 8 hours watching Arrested Development.  You will want to check this sim out soon, as A Rusted Development is going to be taken down within a few weeks! Hat-tip to Ziki Questi.)

So here’s where I try out another sporadic idea for a blog post.

This one’s called What Can RL Teach Us?

So a friend of mine in First Life is a professional photographer.  She gets paid to do photography, she gets paid for making the whole mess of a wedding photo shoot or a set of graduation pics look easy and effortless.  She linked me to a photo essay which I found a darned good read, and I think you might as well: Dear Model: Posing Tips for How to Look Your Best in Photographs

What struck me initially was ‘here are some really helpful tips for people making poses in Second Life!’, though as I read, I also realized there were some TERRIFIC tips for photographers and models in SL, as well.  It also inspired a few thoughts on the same lines for me.

#1: The Lens Is A Fish Eye.
Every photo you take, things are slightly distorted.  This is Linden Lab giving us something more ‘real’, though it can be quite annoying when you’re doing photographs of architecture and find that somehow, everything’s leaning inwards at the top of your frame. Not because you wanted it to, it just is. 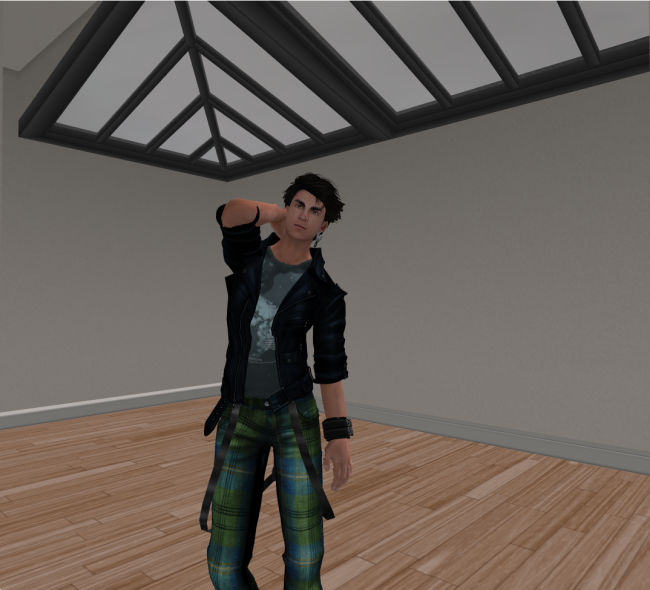 Now, the beams in the skylight are roughly what I’m thinking of, here.  It’s perfectly reasonable that the beams closer to the camera would have a more steep angle than the ones further from, but you can paint yourself into some very weird corners without considering the forced perspective that Second Life uses to render scenes.
Also, note how I accidentally (seriously, I wasn’t thinking about it) made my elbow the focus of that photograph, instead of my face, or the ceiling, or the corner of the walls near the floor, or…? You have to think about sight lines, think about how the architecture or the layout of your shot draws the viewer’s eye to one place or another.
Additionally, note how not paying attention resulted in the sculpt of my jacket prodding through my forearm.  All I was thinking about when I took the photo was that I wanted to get a good example of how forced perspective can tweak with the shape of what’s in the background, but I managed to put two serious violations in my foreground!

As I was first drafting up this post yesterday, my friend Nigel came up with a post that made me very, very covetous.  He found a really keen bit of an animation HUD which allows you to adjust poses.  I SO WANT THIS THING.  I would recommend it to everyone who ever hops on a poseball, based on Nigel’s post about the thing, which is named Animare.

One of you should buy me this. YES, I AM JOKING.

The initial URL that I linked here, though, is really full of TERRIFIC suggestions of things Not To Do when you’re photographing an avatar. Or when you’re an avatar being photographed. Or when you’re designing poses.  I cannot stress strongly enough how useful the tips are gonna be to anyone doing portraiture or modeling in SL.

…nope, not going to be doing this hunt.

As a gay man who doesn’t even hang around women much in Second Life, I swear that hear more about boobs on SL than a gynecologist doing double-overtime to try to pay for his son’s college education.

If you’re not in Second Life, the link above will likely be gibberish to you.  And to compensate you for that, here, have something pretty and calming to look at.

Picture unrelated to topic, but gee, it sure is a pretty leftover from the Kiyomisu exploration, isn’t it?

So here’s this week’s:
Meme instructions: Blog a tutorial and teach me something that you think I might not know about (even if I do, doesn’t matter, do it anyways). The tutorial can be something within Second Life (how to build, create tattoos or clothes, pick up guys at info hubs, tie your virtual shoelaces, whatever…) or something in Photoshop or on any social network (just focus on something sl-related somehow). Make it informative, make it hilarious, make it whatever you like! I’d just love to learn something from you that you may be good at and are willing to share. Remember to leave your link in this meme’s post so others can come by and learn too!

I thought I would take the opportunity to teach you a little about how I get the photos I get in SL that people just go so gaga over.  These are probably going to be pretty straightforward instructions to anyone who’s bothered with the in-viewer post-production tools, but here we go!

END_OF_DOCUMENT_TOKEN_TO_BE_REPLACED

There were giants in the earth in those days; and also after that, when the sons of God came in unto the daughters of men, and they bore children to them, the same became mighty men which were of old, men of renown.

Nigel Riel is someone I’ve had the honor of knowing for *coughreallyfreakinglong* a good length of time.  I’m always impressed by his artistic expression and his meticulous attention to detail.
He just opened up the sim he’s been working on for some time, at long last, to visitors.  Care to take a peek?

I’m only going to give you oh… one corner of this sim, I feel I should point out.  I’d like to let you explore and find the pieces of beauty that are here on your own, and appreciate them without me having drawn scales over your eyes.

I’m most fascinated by the gargantuan sculptures Nigel’s done in the place, myself. I’m only in this photo to provide some scale as to HOW huge.

They clutter the landscape here, these faceless giants, whether it be at the heart of the sim-

or atop the mountains.

(in that previous one, the plant at lower-left is something Nigel created himself, as well).

And there are other tidbits, as well as these cyclopean forms.  Like this little theatre.

You can explore Sandalphon by clicking on the last two-thirds of this sentence.

END_OF_DOCUMENT_TOKEN_TO_BE_REPLACED

Ahh Venice, a gem of brick and mortar, tile roofs and canals, crystalline blue water and marble.  Bustling by day, and by night a medieval maze of walkways and bridges, piazettas and wellheads.

A beautiful beautiful place, and one that perhaps you’ve always wanted to visit.  You should visit- I recommend it highly!  But if it’s outside your travel budget, you have options… 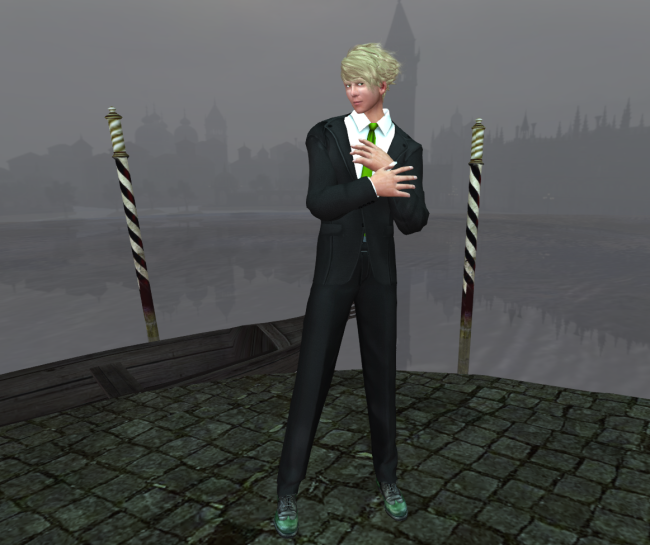 END_OF_DOCUMENT_TOKEN_TO_BE_REPLACED

The title, translated to English, is ‘Serendipity (Kiyomizu-dera)’.

China my China, I’ve wandered around and you’re still here
(which I guess you should be proud of)
Your walls have enclosed you, have kept you at home for thousands of years
(but there’s something I should tell you)
All the young boys, they are dressing like sailors

Another one that Ziki Questi brought me, here’s the China sim, photographed to look like an ink painting on washi paper.  Beautiful bit of work, isn’t it?

So yesterday, all my mesh hair from Wasabi Pill got eaten by Linden Lab’s ‘network’ of inventory ‘servers’.  I emailed the staff at the shop to ask if they might have a redelivery terminal as everything had evaporated, and the owner was kind enough to just throw me everything I’d already bought!  This was awesome, so I figured one of my favorite hairs of theirs deserved a place in the sun.
And in the process of trying to decide where to go seek that place in the sun, I found myself looking at Ziki Questi’s blog again, and drooling over the gorgeous sim that she’d linked.  So there we go, I’ll go there. 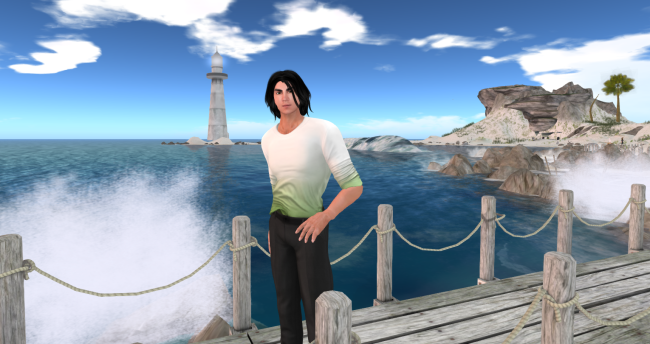 While this is supposed to remind one of northern Baja California, it reminded me, frankly, of Alta California coastlines (that is, the USA’s part of what was called California).  I was pleased with this photo!  And with the sleeker look with the Zach hair from Wasabi Pill and the FATEwear shirt and pants!   Maybe… there is more FATEwear I want???

So I went to check on that. I did not find more FATEwear that I needed to wear, as fate would have it.  But I did find myself wondering what I could pull off with the really gorgeous landing point Damien has set up for his guests, and I was… pretty pleased indeed.